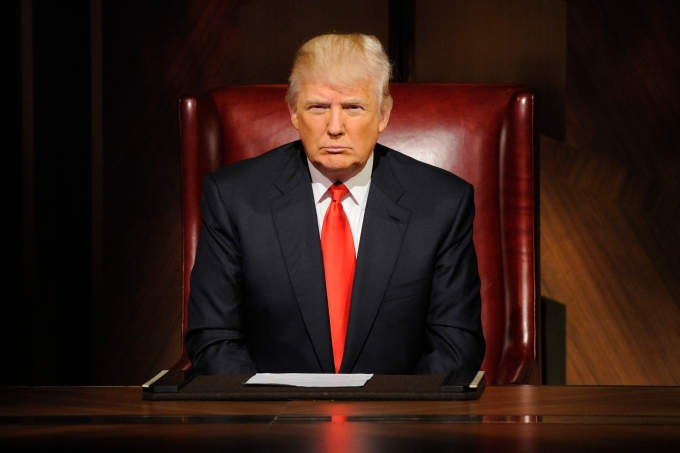 NEW YORK – Live from the Winter Palace in Palm Beach, Florida, PRESIDENT DONALD J. TRUMP convenes his Government in Exile on January 19, one day ahead of the felonious inauguration of Crooked Hillary Clinton.

The enthronement will highlight the launch of TRUMP TV, a 24/7 cable and satellite channel dedicated to the tens of millions of devoted Members of the Movement (MOMS) to Make America Great Again.

PRESIDENT DONALD J. TRUMP and Vice President Ivanka TRUMP will be joined by his cabinet and First Lady Melania TRUMP at the Winter Palace, formerly known as Mar-a-Lago – which means “sea to shining sea” – for the swearing-in ceremony.

Also attending will be:

“This is the most diverse cabinet in history,” the PRESIDENT-IN-EXILE-IN-WAITING DONALD J. TRUMP said Wednesday. “You have the woman, the black, the brown.”

The investiture broadcast, from the Grand Ballroom of the Winter Palace, will be followed by a televised cabinet meeting and a round of golf at the fabulous TRUMP International club in West Palm Beach.

The eight-hour special, from 9 a.m. to 5 p.m. EST, will be a preview of the classy shows that will be the hallmark of TRUMP TV.

The rest of the TRUMP TV schedule:

6 – 7 p.m. – The Palin-Hannity News Hour: Straight talk on political disasters in Washington from Sean Hannity and the unfiltered worldview from Alaska from Sarah Palin, the Secretary of State and Ambassador to Moscow.

7 – 8 p.m. – Fire Away, with Wayne LaPierre: The executive director of the National Rifle Association (NRA) answers callers’ questions about protecting yourself, your loved ones and the Second Amendment, and how to form an armed militia in your community.

2 a.m. – 3 a.m. – Who Wants to Be a Billionaire: Real estate seminars with disciples of the boss, PRESIDENT DONALD J. TRUMP.

5 a.m. – 6 a.m. – Unclassified with Julian Assange: A daily look into the crookedness of the Clinton White House with the WikiLeaks whistleblower.

6:30 a.m. – 7 a.m. – Wake up with Ivanka and Melania: The Vice President and the First Lady lead you in morning exercises.

7 a.m. – 9 a.m. – Thank you, Mr. President – Get your day started and your credit cards ready at a one-stop shop for TRUMP hotels, resorts, golf courses, signature clothing, accessories, home furnishings, fragrances, books and much, much more.

Weekend programming will include:

TRUMP Productions is now hiring for TRUMP TV at all levels of management and production.

Employees are required to volunteer for service to the upcoming launch of the TRUMP PARTY and the TRUMP 2020 campaign.

A lifetime confidentiality agreement will be signed and a legally binding loyalty oath taken on the date of employment. 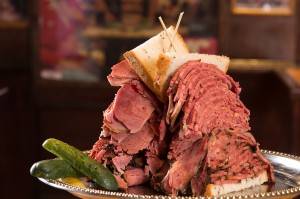 I’ve been thinking about pastrami since I read recently that the Carnegie Deli is closing.

I have history with pastrami and the Carnegie.

I grew up in a New York where every Jewish neighborhood had at least one deli, when the words deli and takeout were synonymous. Now, there are reportedly fewer than 20 in the five boroughs.

In my New York, as in Herb Gardner’s wonderful 1962 play A Thousand Clowns, delis provide sustenance to the soul of the city.

“Irving R. Feldman’s birthday is my own personal national holiday,” declares Murray Burns, the play’s free-spirited protagonist. “He is proprietor of perhaps the most distinguished kosher delicatessen in this neighborhood and as such I hold the day of his birth in reverence.”

It’s a pastrami sandwich George Costanza turns to when he discovers the orgasmic qualities of mixing food with sex and finds a woman to complement his appetite when she purrs: “I find the pastrami to be the most sensual of all the salted, cured meats.”

Milton Berle spoke for all of us when he said: “Anytime a person goes into a delicatessen and orders a pastrami on white bread, somewhere a Jew dies.”

That joke required no further commentary when Woody Allen had Annie Hall order “a pastrami on white with mayonnaise, lettuce and tomato.”

Given opportunity and mentoring, newcomers to the city can become associate members of the tribe, enthusiasts of the pleasures of pastrami.

Russell Baker, originally from tiny village in the mountains of Virginia, seemed to stamp his New York passport with pastrami references in countless Observer columns in the New York Times.

“That racket on the roof is too much,” said Mitgang, a connoisseur of Times Square pastrami houses who is not accustomed to the sweet country sound of rain on a tin roof.

“Why don’t we, just once, order the salami and eggs?” asked Mitgang after five consecutive days of pastrami on rye.

About ten blocks from the old Times Building was the Stage Deli. Opened in 1937, it was known for drawing celebrities.

And, sure enough, when I went there for the first time, when I was a copyboy at the Times in the mid-1960s, I was seated next to Tom Poston, the deadpan comedian from The Steve Allen Show.

The Stage named sandwiches after its famous patrons. When I returned many years later, all its 24 triple-deckers carried a nametag – from Alec Baldwin (brisket, corned beef and Swiss cheese) to Julia Roberts (chicken salad, hard-boiled egg, lettuce and tomato) to Barbra Streisand (pastrami, turkey, roast beef and Swiss cheese).

The Stage started going downhill in the ’70s, when it became known as a hangout for gangsters.

After that, the Carnegie, a block north on Seventh Avenue, was top banana in Midtown.

My first taste of the Carnegie came on a pilgrimage to my hometown shortly after 9/11. After the long drive from southern Ontario with my wife and daughters, it was comfort food – pastrami, corned beef, rye bread, knishes, pickles and deli mustard.

A couple of years later, doing a story for the travel pages of the National Post, I sat down for lunch with Sandy Levine, the Carnegie’s bald, beefy proprietor.

At noontime on a winter weekday, the restaurant was packed, all 160 seats occupied with chazzers chomping on the Carnegie’s trademark overstuffed sandwiches – a full pound of meat between slices of thin rye bread.

“Betcha I’m the only one in here from New York,” Sandy confided at our table in the middle of the small dining area – I held my tongue – then set out to prove his point.

He turned to a young couple at a table over his right shoulder: “Where you from?”

He hollered to another couple: “Where you from?”

The demonstration appeared to support the idea of the Carnegie as a tourist trap, where rubes forked over big bucks – $13 then, $20 now – for a grotesque sandwich.

“The somewhat catty truth about the Carnegie Deli is that it is one of those New York destinations that actual New Yorkers visit once or twice and then frequently decide they have had enough of,” the Times wrote in its story that the restaurant is closing Dec. 31.

It also slipped in the line that the Carnegie “has been putting out cardiologically perilous fare since 1937,” piling on decades of heartburn and heart-attack jokes leveled at the city’s Jewish delis.

With the Stage having shuttered in 2012, Midtown will be a deli wasteland, pastrami out of fashion, gone in a world of takeout sushi and Szechuan.

I knew it was coming. As I wrote in my novel:

I picked up pastrami, rye bread, knishes, pickles and a cheesecake at the Carnegie Deli on my way back to Park Avenue. “When you said you’d take care of dinner, I thought you meant you’d take me out to a nice restaurant,” Jeannie said as I unpacked the food in the kitchen. “I haven’t eaten this stuff in … I don’t know how long.”

“I hope you packed your Nexium.” 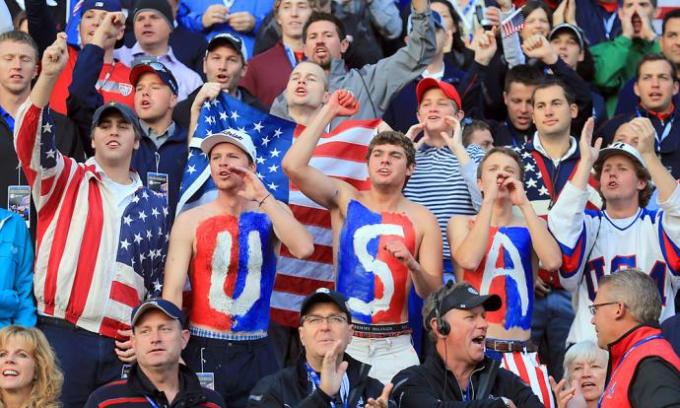 I viewed the Ryder Cup this weekend through the lens of Trump’s America.

No Muslims, no Mexicans, no blacks.

Patrick Reed, a chubby Texan who flaunted his fine play like a crazed Sasquatch, led the Americans over the Europeans throughout the three days at Hazeltine National Golf Club outside Minneapolis.

“A hero for our country,” declared teammate Jordan Spieth.

“Hopefully, we made every American proud,” said Phil Mickelson.

This American, from his refuge north of the border, watched the proceedings on NBC. 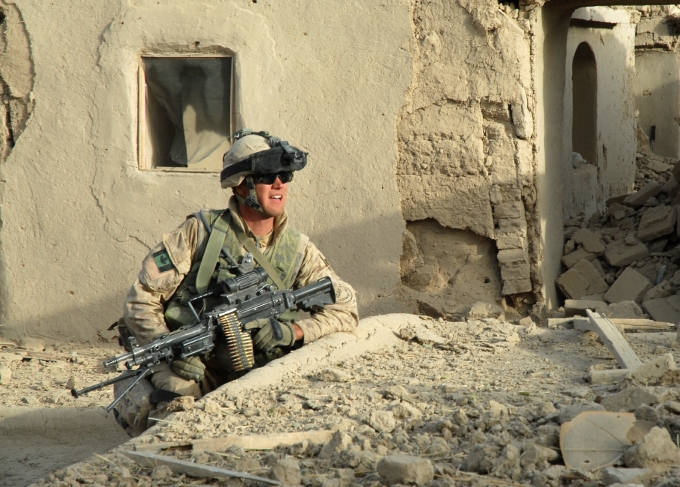 The picture above is from Graeme Smith, who supplied this caption: “Here’s a photo I took of Klukie in September 2006, during Operation Medusa. He was a good guy.”

In my last piece, on Josh’s life and death, I included a couple of quotes and a nice passage from Smith’s Oct. 2, 2006 story in the Globe and Mail.

I sent Graeme an email, with a link to my blog. Besides the photo, he replied with a kind note and told me he is still in Afghanistan, doing political analysis for the United Nations in Kabul.